Why Sea Salt is Better Than Table Salt 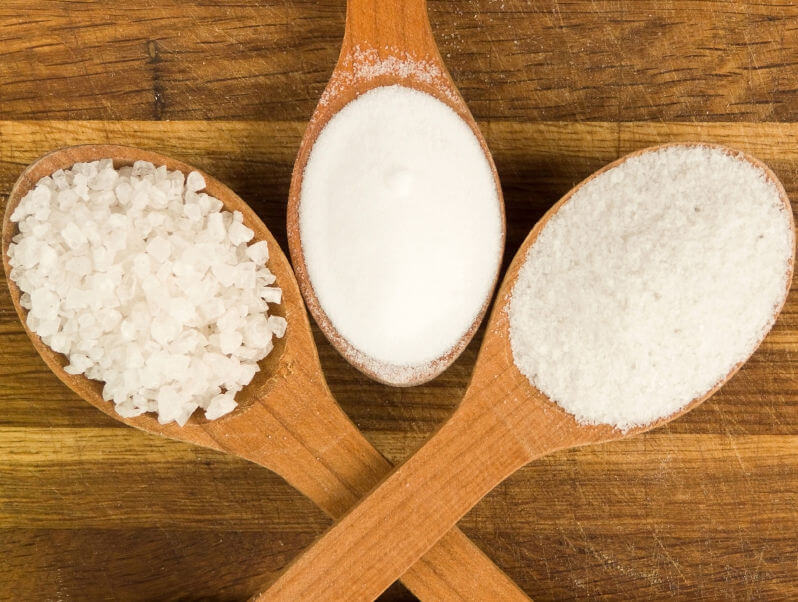 If you buy items linked on this site, RFCS may receive a small commission. (Full disclosure here.)

Salt has earned a bad reputation in recent years, so it may comes as a surprise to hear this ancient seasoning is actually crucial for good health.

Humans are made up of about 72% water and 28% mineral salts, (plus some bacteria, proteins and fatty acids). As such, there are two “oceans” of water in the body. One ocean is held inside the cells of our bodies, and the other ocean is the sea of fluid existing outside of our cells.

Your good health depends on a delicate balance between the volume of these two bodies of water, and this balance is achieved by salt—natural, unrefined mineral salts.

A Grain of Salt

The typical modern, refined table salt can be compared to refined sugar and refined flour—it used to be a healthful, whole food, but our industrial food system has stripped and processed it into a disaster waiting to happen.

Like most factory-made, food-like products Westerners eat today, what began as an essential nutrient has been disfigured into a detriment to our health.

Major table salt producing companies mine unpalatable and impure rock salt from the earth, then dry it in huge, fossil-fuel-guzzling kilns with temperatures reaching 1200 degrees F. This changes the salt’s chemical structure into pure sodium chloride, which is very different from natural salt which contains lots of trace minerals.

But if that weren’t enough, after this extremely energy-intensive drying process, toxic additives like fluoride, anti-caking agents, excessive amounts of potassium iodide and other poisons are mixed into the salt. Many versions of commercial salt also contain toxic aluminum derivatives, which have been implicated in a number of health conditions, including Alzheimer’s disease.

All these additives can cause discoloration in refined salt, so bleaching agents are then used to restore the desirable white color. The end product is a highly industrial, toxic pseudo-food Americans have come to think of as “salt” that causes the potential for a myriad of health problems.

Refined sodium chloride (table salt) is an unnatural chemical form of salt full of additives that your body recognizes as a foreign substance, and much like processed food full of chemical non-food additives, your body wants to break it down and get rid of it as quickly as possible.

According to Dr Barbara Hendel, researcher and co-author of Water & Salt, The Essence of Life, it is refined, processed and bleached salts that are the problem. Salt is critical to our health and is the most readily available nonmetallic mineral in the world. But our bodies are not designed to processed refined sodium chloride since it has no nutritional value.

In fact, refined table salt has been implicated as a cause of the Western epidemic of autoimmune disease!

Salt of the Earth

Natural, unrefined “whole” sea salt (whether from the sea or from ancient sea beds) is better than table salt, by a wide margin. In contrast to refined table salt, most sea salt is naturally harvested and dried in the sun, and contains a wealth of trace minerals and electrolytes that are easily assimilated by your body. Salt from ancient sea beds is mined, but you can find brands that are minimally processed and still contain the trace minerals present in ancient sea water.

Unlike refined salt which contains only 2 or 3 elements, natural whole salt from the sea contains about 80 mineral elements (potassium, magnesium, calcium, sodium and more) that are essential in small amounts for a variety of functions in the body.

These mineral salts and electrolytes are key players in enzyme production as well as immune system, adrenal and thyroid function. And while, compared to food, natural salt is not a major source of minerals, like any whole food, sea salt has a natural balance and a lack of toxic additives, so we are actually nourished by it, rather than depleted.

According to Dr. F. Batmanghelidj in his book, Water: For Health, for Healing, for Life:

However, not just any salt will do. It is refined, processed and bleached salts that are the problem. Our bodies are not designed to processed refined sodium chloride since it has no nutritional value.

However, when a salt is filled with dozens of minerals such as in the rose-coloured crystals of Himalayan rock salt or the grey texture of Celtic sea salt, our bodies benefit tremendously for their incorporation into our diet.

The Salt Hypothesis is Bunk

The problem with this hypothesis is that it has never been proven. In fact, it has been often disproven.

An eight-year study of a New York City hypertensive population stratified for sodium intake levels found those on low-salt diets had more than four times as many heart attacks as those on normal-sodium diets—the exact opposite of what the “salt hypothesis” would have predicted. (1995). Dr. Hillel Cohen who worked on the study documented no health outcomes benefits of lower-sodium diets.

In fact 17 different studies worldwide have found NO relation between salt intake and the incidence of stroke or heart attack.

Read the rest of the article at Small Footprint Family!

[jetpack-related-posts]
RFCS is a participant in the Amazon Services LLC Associates Program, an affiliate advertising program designed to provide a means for us to earn fees by linking to Amazon.com and affiliated sites.